The software the builds Robonk has been significantly retooled for the next 256 strips. Lots of changes have happened. The rendering of the robot has become more rich, the robot has changed ever so slightly (and gained a new rug), panels are generated entirely in a new version of Bubblematic called Panelmatic (plus Titlematic for generating the title pages), the dating profile database has been reloaded, and there’s mild improvements for the script generation system. 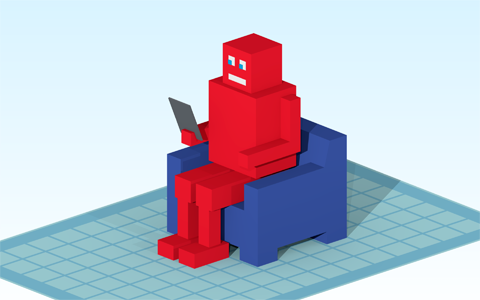 The robot views are now rendered in POV-Ray, a “high-quality, Free Software tool for creating stunning three-dimensional graphics”. POV-Ray allows for a series of still images to be rendered with lighting effects. Being a command line tool that accepts options arguments, I was able to use PHP-CLI to call for the full series of angles and facial expressions needed to generate the panels for the strip.

Robonk (the robot) looks about the same, but there are changes:

The biggest change is the new rug. Before, it was the workplane in TinkerCAD, and now it’s an “actual” drawn rug.

The biggest change with all of this is that Photoshop and TinkerCAD are no longer needed to generate a comic strip. A big savings in creation time while having an improved look. Using Titlematic is a multiplier (maybe 5x) faster than using Photoshop. Panelmatic also saves a significant amount of time while creating a nicer looping strip, though a chunk of those gains existed with the predecessor (Bubblematic).

The database load was dirty (beyond just the content in the tables) and there was missing data. Everything was rebuilt/reloaded and now there’s more available profiles to draw from, and they’re more complete as well. The next set of strips (#00200-#002FF) will have more usernames on the title panels by percentage than before because the database is more complete.

Behind the scenes, the script generation system Robonkers has seen mild improvements, which make everything easier to work with. It rejects a higher percentage of profiles compared to the earlier versions, but there’s more overall profiles to work with because the database reload increased the overall amount of accessible profiles. The character name for the human in the source dialogue is now “human:” rather than “you:”.

Robonk is ready to go for another 256 strips, and this will be the basis for the next 256.

Normally, there isn’t a computer-related topic covered in a Robonk comic strip. Today, strip #00200 was an exception. 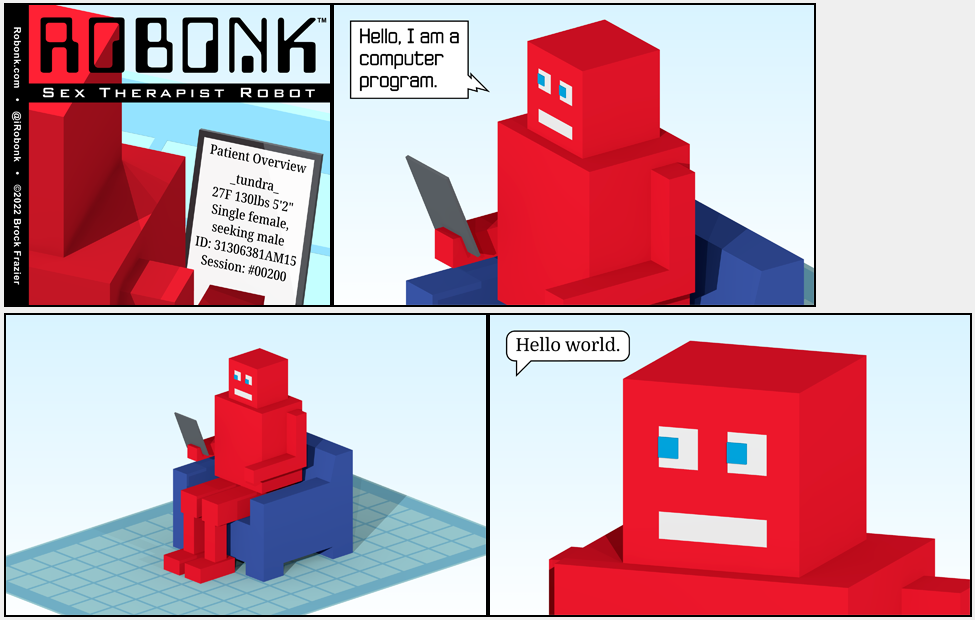 There’s a lot of truth to the saying that “if you have to explain it, it isn’t funny”. Thankfully, some viewers will get the joke, and also, it’s just one strip rather than a series.

Okay, what does it mean?

“Hello, World” is a common starting point for working with a programming language. It was created by Brian Kernighan, who is best known for writing the book The C Programming Language with Dennis Ritchie, creator of the language (and co-creator of UNIX).

Two programming languages, Perl and PHP, are used for the Robonkers system that generates scripts for the comic strips. Below are ways to Hello World in Perl and PHP.

The escape sequence “\n” in the above examples is for a new line and was popularized by the C programming language. 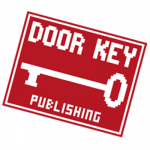 All are self-published under the Door Key Publishing name. “If it’s hilariously awkward, it’s Door Key.”

As the title says, it’s the first 256 strips in the original style. Includes source info for the strips, plus the blog posts from that era are in the back of the book. I never thought I’d write a book, but come to think of it, artificial intelligence (AI) and online dating profiles wrote most of it, not me. There was a chunk of data migration and programming that created the book, with most of the pages completely (or partially) built in PHP using the TCPDF library.

Diagram from the book, showing how the strip pages and source pages work

The book features all of the original 256 strips plus the source, which is available at Robonk.com by clicking on “Source” under each comic strip. 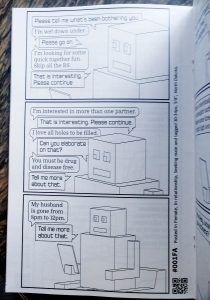 This was an afterthought. Figured I could make coloring book versions of many of the strips. Wrote some software to convert the panel art into line drawings, then more software to convert the completed panels into pages. Had enough useful strips to make it two volumes. The coloring books are entirely made from strips from the second 256 set (#00100-#001FF) and were built into books by PHP/TCPDF. Each page features one strip (minus the title panel) plus the “Posted in” information from Robonk.com (WordPress) and a QR code with a link to the strip. The books not sent through USPS Media Mail come with red and blue crayons.

There will likely be a compilation book for the second 256 strips at some point, but I’m currently working on the new look and software for strips #00200-#002FF which will debut in early 2022.

At the time of writing (January, 2020), Robonk is still three days a week. Every Monday, Wednesday, and Friday there’s a new strip and each one is three panels plus a title panel.

What would a larger Sunday style Robonk look like? I found an AI “conversation” that didn’t split well into multiple day strips but had enough dialogue for a Sunday strip with seven panels plus a title panel. Here it is. There’s no plans at this time for Sunday strips at all, and this strip is the first to not have a Session ID since the alpha level strips back in March, 2017.

Robonk is very different from other comic strips. Most notably, it is written by 1960s-style Artificial Intelligence (AI) called ELIZA responding to online adultery dating profiles. The early process was to copy/paste the lines from the dating profiles into ELIZA. This process was notably more labor intensive than desired and time consuming. See the earlier blog entry for an idea of how things were done initially.

Robonkers is the new script generation system for Robonk. Robonkers allows me to edit profiles before they are fed into ELIZA, and then it runs all the conversations in one go. The resulting text is then manually edited for final scripts.

One of the advantages of running at a crude level early on with copy/paste is having a better idea of what the more advanced next system needed to do and how. After months of using the manual method and seeing what would help the comic strip, building the new system was pretty easy.

There’s still a ton of room for improvement for Robonkers, but as it sits, it’s far nicer than the earlier days using copy/paste. It processes 3000 profiles in about 15 seconds. That’s nice.

When you’re using artificial intelligence (AI) to write a bunch of a comic strip series, especially crude 1960s-style AI, it’s going to be awkward. That’s to be expected. There was that one time when the human said (in episode #00063):

…and then Robonk replied back with…

That’s going to happen when dealing with 1960s style AI. The humans have different issues.

The human lines in the Robonk comic strip come from online dating profiles. The humans also error, typically with spelling and punctuation. Here’s an example involving a recent strip. In one place, the human has jackalope spelled as “Jacalope” and of course Robonk repeats the error.

Later on in the same person’s profile, they correctly spell jackalope:

Upon further review, the term jackalope shouldn’t be capitalized. So, I’m now going back and correcting this edition of Robonk before posting it on the Robonk facebook page. It’s #0006E and can be seen here at Robonk.com. And yes, jackalope, like Robonk, is a portmanteau.